FROM THE HISTORY OF CHURCH

Single-Hand Consecrations and the Irish Church 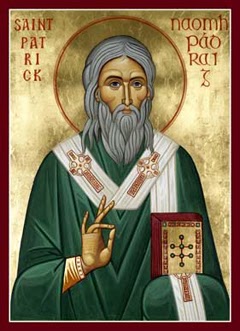 For centuries, from the time of St. Patrick until the 12th century in Ireland, the vast majority of all the Irish bishops were consecrated in single-hand consecrations [i.e., that is, during the Mass, when the consecration took place, only one bishop was present who did the laying on of hands, with prayers and anointing with Holy Chrism]. There were exceptions, of course. Strictly speaking, this practice was not in strict accord with Apostolic Canon I or Canon IV of Nicea. The Council of Arles, as well, in 314, had mentioned the three bishop rule, in fact, it recommend 7 bishops, if they could be had. In general single-hand consecrations were accepted under circumstances of persecution, or other extreme cases; of course, there was an accepted tradition of competent authorities, like Synods and Patriarchs, authorizing single-hand consecration, for example, St. Augustine of Canterbury; or, St. Patrick of Ireland, other cases, etc. Of course, it should be noted that Luciferus of Cagliari single-handedly consecrated Paulinus of Antioch, and Rome and Alexandria simply 'entered into communion' with him without a word of complaint, while they gave the cold-should to St. Meletius. It should also be noted that Paulinus of Antioch continued this by single-handedly consecrating Evagrius as his successor, which Evagrius enjoyed the communion of the Orthodox Romans (though, Blessed Theodoret regards this as a canonical violation, despite councils in Rome, Antioch, and Capua regarding it as acceptable). And, we should also point out that Siderius, a young man, was consecrated Bishop of Palaebisca and Hydrax by Bishop Philo of Cyrene, again, contrary to Apostolic Canon I and Canon IV of Nicea. Palabesca was, in fact, never a see, but had been in the territory of a Bishop Orion, who, apparently had neglected it (thus calling forth the demand by the laity for a bishop). Bishop Philo, however, felt he had no responsibility to the local metropolitan, which see was then in the hands of Arians (and thus, Philo of Cyrene refused communion with it). Of course, any consent was impossible from other bishops, as they were in hiding from the Arians. However, despite this, St. Athanasius, as testified, for example, by Synesius in the later 4th century in Epistle 67, overlooked this, and indeed, promoted Siderius to an higher office. We can multiply cases, such as that St. Sidonius Appolinaris in the 5th century, etc.

However, we may ask, "What about the Irish circumstance?" Obviously, we have centuries of saints, made bishops in these circumstances. Ireland was, in fact, full of Bishops. At. St. Patrick's repose, there were about 350 bishops in Ireland he had consecrated. The number actually grew over the next few hundred years. In general, we know that about half the abbots of the monasteries were bishops; the other half were abbots who were presbyters but had a bishop living in their monastery. In some cases, each bishop would have one or two (or more) 'auxiliary' bishops [called sometimes choriepiscopos, which were still bishops at this time] they had consecrated by themselves. In most cases, a bishop would consecrate, single-handedly, someone as his successor. So, were all these bishops not 'canonical bishops' according to the 'strict interpretation'? Were these men, who performed great miracles, saw the Divine and Uncreated Light, conversed with Angels, etc, simply deceived for centuries? SURELY NOT!

So, we are left with needing an answer to this question. My 'theory' as to this circumstance is that, this is simply a less than ideal practice, that, due to ages of usage, and, most importantly, to the universal consent of the entire Irish episcopate in this practice [as evidenced by the fact that they all accepted it, synods did not complain about it, as well as the fact that Irish canonical collections mention the three bishop requirement, so they knew about it, but, it apparently fell into a sort of 'abeyance' in some sense, etc], it gained a sort of 'approval' by tradition. The same Canons that censure single hand consecrations also censure the practice of translating bishops from see to see; however, despite this later practice having been widespread, especially in the last 500 years of Church history (being especially bad in the post-Byzantine Eastern Patriarchates and in post-Petrine Russia [in the Russian case, with some bishops being moved to two or three sees in a 10 year period]), this did not cause one Church to cease to be part of the Church, or uncanonical. One can argue, I suppose, that, since there was a tradition of allowing single-hand consecration due to the consent of a Synod, the general consent of all the Irish bishops by their tradition of this practice, consisted in this. Of course, like the case of the translation of bishops, this is less than an ideal practice.

To my mind, such as it is, I believe this is surely a better alternative than declaring St. Patrick and the whole Irish episcopate during this period prior to the Schism from Orthodoxy, to be outside the Church.

"The Irish and the persecution they suffered for the Holy Faith can be compared with St. Matthew the New Confessor and the GOC. During 1948, Archbishop. Matthew could not find a True Orthodox Bishop to help consecrate another bishop for the GOC". Father Nilos Eisenhut