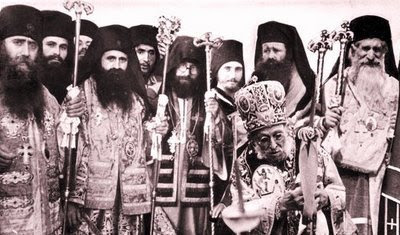 Last year completed 60 years that St. Matthew (then bishop of Vresthenis and later archbishop of Athens G.O.C.), only remaining Bishop of the ORTHODOX CHURCH OF CHRIST IN GREECE, thus the September 1948 ordainment the Archimandrite Gedeon bishop of Trimythountos (Cyprus), renaming him to Spyridon, in honor of St Spyridon, who was bishop of the Diocese of Cyprus.
The consecration has caused the anger of the enemies of Orthodoxy and the Church of Christ, who waited for the death of St Matthew, then only Orthodox bishop, to the disappearance of the true Orthodox Church of Christ. Following the establishment of the Holy Synod then followed persecution of the Orthodox (as heretics and schismatic called "old calendar" or "mattheists”) for several years. The separatist old calendar (Florinates-Akakians) and New Calendarists-ecumenists blame the consecration of Bishop of Spyridon by St. father Matthew because he was without the participation of another bishop as required by the sacred rules of the Church. Of course the respect of the sacred rules is indisputable, but as we learn from the head of the Church, Jesus Christ, "the letter kills while the spirit gives life "(to Corinthians Second Section C, 6.) That is why St Matthew, respecting the spirit of the Holy rules, applied economics and the ordainment as bishop Spyridon had done at critical times for Church of Christ and other holy fathers (,Saint Athanasius, the great).
After St Matthew with the bishop of Trimythountos Spyridon ordainment three other bishops: the bishop of Thessaloniki Dimitrios, the bishop of Patra Andreas (and later Archbishop of Athens 1972-1995,) and the bishop of Corinth Kalliston.
We must remember that the same period in Greece since 1937, there was a group of schematics bishops under former Bishop Chrysostom of Florina, who was separated from the Church by Saint Matthew and the crew of the Church and Orthodox distorted the original confession, which was accepted behind the Church of Christ from New Calendar Schism, said that the New Pope’s Calendar “church” was not a schism “under active". Eventually he died in 1955 without being involved in the consecration of bishops for the Genuine Orthodox Church and refusing to return to Orthodoxy and thus unite the divided people of genuine Orthodox Christians (G.O.C.). He denied in public that he would take ordination of bishops because he would harm his mother new calendar "church" (see newspaper "Vradini" 11-12-1950). Following the death of former Florina the bishops of his part were joined in new calendarism while his fans remained without bishops did not joined in the Holy Synod that was ordainment by bishop Matthew but secretly in abroad a false “bishop” ( former archimandrite Akakios Pappas) was ordained by an old calendar Russian “bishop” and a Romanian New Calendarist “bishop“. This act was obviously incorrect because, in addition to the other, strengthened and maintained that the split of Florinates-Akakians while there was canonical, Orthodox Synod.
However, the Genuine Orthodox Church of Christ was lighter after the holy consecration in 1948, while in the midst of persecution and temptations, giving the message that true "ONE, HOLY, CATHOLIC and APOSTOLIC CHURCH" that preaches the "Creed" , is none other than the CHURCH of G.O.C. of Greece, which keeps the exact doctrines and traditions of the Church of the Holy Apostles and the saint fathers.
Today, the apostolic succession of confessor St Matthew keeps the only canonical Holy Synod of the Church of Genuine Orthodox Christians of Greece, that is chaired by the Metropolitan of Messenia Gregory, preserving the "small flock" of the Orthodox believers away from the various sects and especially the heresies of Antichristian Ecumenism, that first step towards the introduction of the orthodox crew was the replacement of the paternal ( old) ecclesiastical calendar by the new calendar to achieve first the calendar’s unity of Orthodoxy and sectarianism and to relieve the conscience of religious believers. The conclusion we can draw from this is none other than the words of our Christ
"EVEN THE HELL’S DOORS CANNOT DESTROY MY CHURCH (Gospel of Matthew)
Note: The photo above is distinguished by the Holy Synod of G.O.C. in 1948.In the center (he seats) St Matthew, confessor Archbishop of Athens.