Letter of Patriarch of Constantinople Germanos V
Concerning the "Name-Worshippers"

To the Very Holy Synod conducting the Church of Russia,
Our beloved Sister in the Holy Spirit, we give the fraternal kiss in Christ. 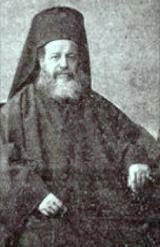 We have read and re-read with the greatest attention, together with our Sacred Synod, the letter dated 28th of this month N° 7664, that Your Greatness has sent to us about the former monks of Mount Athos being now in Russia, who have fallen into the newly appeared heresy of the onomatotheists, and who persist in it with bad will and stubbornness, in spite of the many kinds of advice from the Church and the announcement that was done to them, that they will be definitely and forever expelled from Mount Athos and punished as per the Sacred Canons if they continue to persist in the heresy, in the disobedience and in the impiety to the Church, who has definitively condemned and disavowed their foolish doctrine as heretical and stained with blasphemy.

But Satan, who is the father of the lie and of the heresies, has to such an extent darkened their minds and denatured their hearts, that, far from returning to reason in spite of all kinds of advice that were given to them verbally or in writing, from distance as well as proximity by the Church, they go as far as listening to those who dare "insult" and "blaspheme" when the subject is about things that they do not know, rather than listening to the motherly voice of the Church, who called them with love and eagerness.

They were already enough punished for the sin that they committed against piety, Church and monastic discipline; one would wish that the loss that these men have suffered would not go farther and that the damage suffered would remain external, "so that the spirit would be saved on the day of our Lord Jesus Christ".

But alas, as your Greatness has made it known to us, Satan, the killer of men deviated the reason and hardened the heart of those men, so that, even now, they refuse to come back to reason and to acknowledge and confess their mistake. That is how, in spite of being punished a first time already, they persist in the wrong way and continue to blaspheme against piety and Church. It is thus necessary to take new and rigorous measures against those recalcitrant men who refuse to repent. The judgment and the action of the Church towards them must go farther, and the penalties promulgated by the Sacred Canons against the hardened heretics must be applied rigorously, so that the heresy is definitely punished and the faithful are defended against the error and danger of being contaminated.

As those men are, at the present time, out of our All Holy Ecumenical Throne, they are no longer under our ecclesial jurisdiction. From the political and ecclesial points of view, they are under the jurisdiction of our sister the Very Holy Church of Russia, as they came from Russia and returned there. Applying all of the measures promulgated in the circumstances by the Sacred Canon is thus facilitated.
The ecclesial judgment to be taken and applied in the future towards those heretics, former monks of Mount Athos, is now under the authority of our sister the Very Holy Church of Russia and will be, from all angles, more effective, if the matter would be pursued by her, as it is in her territory that the heresy of the onomatotheists was born and still subsists.
Considering the above, and after deliberating and judging attentively with the Metropolitans, our dear brothers in the Holy Spirit, we have decided, during the session of the Sacred Synod, to entrust to the direct care of the Ecclesial Authority of Russia, all that concerns the ulterior lot of the onomatotheist monks that settled in Russia, irrespectively of their ranks, so that, in her capacity of canonical authority of which they depend, and with the whole power of our Great Church of Christ, she decides and implements all that is necessary according to the Sacred Canons, in inviting the leaders of the heresy and those most prominent in it, to exonerate themselves, by applying to them the legal penalties and, as far as their numerous supporters are concerned, by ignorance or by other reason, by seeing to it that they return to the fold (of the Church).

The Russian Ecclesial Authority is wholly allowed to admit to the Holy Office and to the Holy Communion those who sincerely repented. It will be allowed to let the monks vest themselves as priests and celebrate the liturgy, after a time of probation, but also, conversely, to exclude from priesthood the monks and priests who will persist stubbornly in the heresy and attempt to spread it within the people.

She will be allowed, as said above, with all the needed authority and in agreement with the clauses of the Sacred Canons related to it, to take all decisions and to proceed to all legal acts towards its leaders and supporters without any exception. As it is not improbable that these men, after repenting, if they return to Mount Athos, will cause worry and scandal there, we have decided that none of these men will return to Mount Athos, which we consider just and necessary.

Having taken the above decisions, which we judge useful and in conformity with the circumstances and the ecclesial order, these decisions being aimed at their punishment after judging the adepts of the heresy and at the defense of the Orthodox, we hurry to communicate them to Your Greatness by this fraternal letter. We doubt in no way that, after this fraternal declaration, your Greatness will hurry to accept and implement it, as he will deem necessary, everything that will contribute to the prosecution and extirpation of the evil that threatens the Orthodox people of the pious Russian Empire, and that will defend it against all contagion from the fallen former monks of Mount Athos.

Your Greatness will deign to hold us informed about everything that will be done on this matter.
+ Germanos V Archbishop of Constantinople, New Rome and Ecumenical Patriarch